Yeah, I know what you're thinking: what impertinence that some online slob feels he can decide what constitutes the top 13 Giallo films of all time. Might as well head over to Amazon.com and check out those fanboy lists that pop up every once and a while. Well, I won't argue that, other than to say, to anyone who has seen most of the classic, and even the few modern takes on the Giallo style of film making, that a lot of those lists are crap. Pure crap. To many of them barely include the classics, and some even contain several titles that barely pass for Giallo.
Trust in The Black Glove, folks, because this is the best of the best of Giallo.
Of course there are going to be a lot of the same directors in this list...such as Argento and Bava, because they are, after all, the masters of the form. But you may find a couple of surprising titles on our list, purely because I think they warrant inclusion for what they did for the Giallo genre. Or maybe, if you're a true horrorhead, they won't be so surprising. You'll undoubtedly have seen them and know why I've included them here.
If you've followed Giallo, then you also know they're sometimes short of logic and long on style and the grotesque. Of course, most of the titles come from the 70s, a time of cinematic experimentation, and in many ways, a dangerous time for cinema, because in Giallo, no one is safe. Anyone can die. Anyone can be the killer. There are a few titles outside the 70s grindhouse era, a few in the 80s, and only a couple in the 60s. That's telling, in my mind, about the nature of modern horror cinema.
They're in alphabetical order, so their place in line doesn't have any weight; and remember that most of these jewels were international productions, so their names got changed and bounced around so many times that some of them have been known by a dozen or more monikers over the years.
So without further ado, The Black Glove's Top 13 Giallo Films of All Time 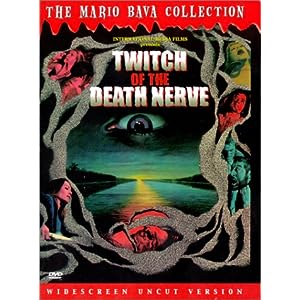 The makers of the original 'Friday the 13th', and its first and best sequel, should have paid the great Mario Bava for this very graphic murder mystery set against the backdrop of a, you guessed it, lakeside community. There are no heroes in this nasty little Italian gem, which is also well known as 'Twitch of the Death Nerve', because every character is a dirty rotten scoundrel and probably deserving of their violent deaths. And this film is filled with them. Hangings, spearings, beheadings...it's all there for the gorehounds. One of the chief reasons to watch this movie is the gorgeous cinematography. 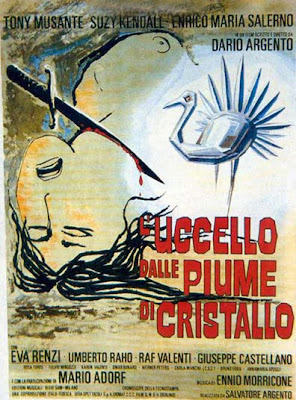 Based on the great Fredric Brown's novel 'Screaming Mimi' (which had already been filmed once before in 1958), this is Dario Argento's directorial debut (his name appears several times on this list, by the way) and it truly set the tone for the modern Giallo. It's a sophisticated and cosmopolitan murder mystery, involving artists and writers and suspicious policemen. One of the key elements to Argento's brand of Giallo filmmaking is the introduction of an innocent person, with no investigative/law enforcement background, who is thrust into a violent murder mystery and has become the target for the mysterious black gloved killer. This time it's Tony Musante and Suzy Kendall are the unknown killer's potential victims.

Directed by Paolo Cavara, this was heavily influenced by the success of the above movie, and followed the basic template of violent murders of a psycho-sexual nature and strange characters. This has been a huge cult favorite for years, and in 2006 Blue Underground finally released a decent DVD master of the movie--for which all horrorheads should be eternally grateful. This is a must view for any Giallo fan.

If you're keeping track, this is the second Mario Bava film to make the list. And what a great movie! Even if you're not a Giallo fan, this is still a movie for movie fans. Beautiful cinematography; elegant, gorgeous women (another classic element of Giallo filmmaking); and more brutal murder set pieces that defy logic. Like all Bava horror movies, the pace is brilliant, and the camerawork is genius. Set against the backdrop of the fashion industry, a mysterious killer is knocking off beautiful women via some disturbing methods, and filled with some rather unsavory characters to keep the viewer guessing about the killer's identity. Also known as 'The Hatchet Murders', and by its Italian name, 'Profondo Russo', this is Argento's 2nd film on the list, and many consider it to be the penultimate of Giallo filmmaking. This is the film that solidified Argento's style and began his musical love affair with prog-rock group Goblin, a band which has done almost as much to create the Giallo form as any of the dozen directors best known for their work in the sub-genre. David Hemmings plays an innocent pianist who happens to be the lone witness to the brutal murder of a psychic. Only problem is he has no idea who the killer is. More strange characters, more ultra-violent murders and more Italian grue. What more could you ask for?

This time Lucio Fulci, who had a few successful Giallo style flicks, gets his due with the story convoluted story of sex, drugs, black magic, twisted religion and killers. This is a keynote pic for Fulci, as it was the first with his burgeoning reliance on gory special effects, and in some ways, helped lead the way for future Giallo directors. The only American director to be included on our list, Brian DePalma had already made a start on his filmmaking career as the U.S. answer to Alfred Hitchcock. But with 'Dressed to Kill', he made his stamp on the Giallo genre, a Euro-style that was already on its way out by the time this pic hit the theaters and made a bundle of money for DePalma and the studio. In fact, its success gave the Giallo genre a bit of much needed resuscitative breath of fresh air and made it possible to get funding for more U.S. produced Giallo films in the mid-80s. You can see its influence on several box office horror hits in later years.
Starring Angie Dickinson, Nancy Allen and Michael Caine, 'Dressed to Kill' is a stylish, almost Noir-ish at times, psycho-thriller with heavy sexual overtones. Well paced and definitely more gory than most big studios were making at the time, it pleased the critics and audiences alike. A definite must for any horror film fan. This is the film that started the Giallo style. Another Mario Bava (3!), by the way, and one of his best. Shot in beautiful, moody black and white, you get to see why this man was a master filmmaker in any style. His intense, complicated use of shadow and light to create tension and narrative play can only be described as genius. Starring a young John Saxon as a mysterious man who attempts to help a young woman who's witnessed a murder, Bava truly keeps the viewer guessing at the killer's identity. Many Giallo tropes were set forth here: the black gloved hand, the phallic killing instrument, the psycho-sexual motivations and eerie musical backgrounds. If you see no other Giallo film in your life (and why would you do that?), see this one. 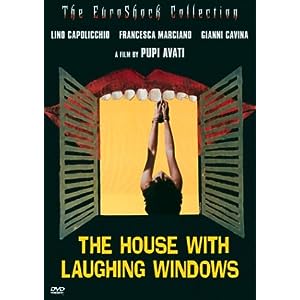 Director Pupi Avati was a master horror director, and this may be one of his best pictures ever. When a young art historian arrives in a small village, people by strange and grim villagers, to restore a rather gruesome piece of art, he finds some secrets are better left undiscovered. Stylish camera work and bloody cuts are a couple of Avati's trademarks in this film, which over the years has become a cult legend among Giallo lovers.

Another from the late, great Lucio Fulci, and its no exception when it comes to delivering strange and disgusting scenes. Some of the scenes (especially the dog experimentation scene) nearly got Fulci imprisoned. If not for the timely arrival of special effects master Carlo Rambaldi with the props used in the film, he would have wound up in prison. Beautiful Florinda Bolkan is having strange drug-induced nightmares of sex and murder, and is surprised to find her next door neighbor has been killed in a similar manner. The film is like a waking drug hallucination at times, something which Fucli means to convey to the viewer. Lots of gore and sex, add up to one of his best non-supernatural horror experiments. 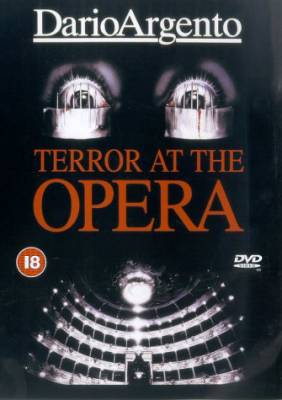 Also known as 'Opera', this is another Dario Argento masterpiece, and one that appeared much later than most Giallo films. This is filled with the now trademark Argento touches: avante garde camerawork, cosmopolitan characters, nods to great art and literature, and some of the most over-the-top murder set pieces to date. Truly, no other director could have created the insanity and brutality which is 'Terror At the Opera'.

We've covered this movie a few times in the past couple of months, so it seems almost like overkill to describe why this movie makes the list. But for those of you who don't make reading each new issue of The Black Glove habitual, I'll briefly say this: it is one of the most perfect blends of slasher and Giallo films to date. Directed by horror master Michele Soavi, 'Stage Fright' is a brutal movie to watch, but also has moments of pure ambient beauty, which any horror fan will appreciate. It's on one hand a total bitch slap against the world of theater and filmmaking, and on the other, a final word of a dying slasher sub-genre.

There are four Dario Argento movies on this list, and this is his most well known and almost impossible to classify as Giallo. Trust me, we could have added another six Argento films to this list, but that would have been unfair and not very representative to some of the other great masters that have worked within his sub-genre of filmmaking. But no Giallo list would ever be complete without 'Suspiria', a gorgeous and brutal act of creation and destruction from a man who is, quite easily, the best Italian director, ever.
Filmed on the last remaining Technicolor stock in Italy at the time, Argento uses the technique to its fullest, with palettes and smears of bright reds, greens and blues that at times feel almost like moving paintings. The settings, the costuming, the dialogue, all of it comes together to make for one of the most perfect and brilliant pictures ever put on celluloid. But don't take my word for it. Check anyone's best of horror film list and this movie is sure to be somewhere in the top 20 or higher. It's the kind of movie that makes a film geek turn to butter.
If you've never seen it, then get it now and watch it. You will not be disappointed.