Fresh Blood: New Releases In the World of Horror 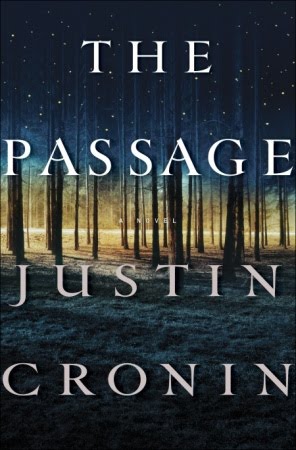 An exciting new release from Ballatine Books, THE PASSAGE by Justin Cronin. Check out the book's web site here: http://enterthepassage.com/ and don't forget to stop by THE FIND SUBJECT ZERO website as well for videos and links for even more angles to the story and interviews with the author. Splice
Release date: June 04, 2010
Starring: Adrien Brody, Sarah Polley,Delphine Chaneac
Genetic engineers attempt to play god by splicing human DNA with various animals to create new hybrids. This doesn’t work when one of their creations develops a mind of its own and wreaks havoc upon its creators.

The A-Team
Release date: June 11, 2010
Starring: Liam Neeson, Bradley Cooper, Quinton "Rampage" Jackson
The 1980’s TV show the A Team gets a fresh overhaul with new actors taking the reins over from Mr. T and the gang. I’m interested on how the director turned a TV show into a full feature length film with new actors at the helm.

Jonah Hex
Release date June 18, 2010
Starring: Josh Brolin, John Malkovich, Megan Fox, Will Arnett, Michael Shannon
Josh Brolin stars in this comic book adaption of Jonah Hex who is a badass cowboy who has sworn to protect the innocent from the evils of the world. Megan Fox provides eye candy and the always excellent John Malkovich lends his acting abilities to round out this film.

Toy Story 3
Release date June 18, 2010
Starring: Tom Hanks, Tim Allen, Joan Cusack, Don Rickles, Wallace Shawn
After many years of the fans requesting it, Pixar is finally releasing Toy Story 3. The whole gang is back in a new adventure that has us following Woody and Buzz Lightyear dealing with full grown up Andy who is getting ready to leave home for college.

The Twilight Saga: Eclipse
Release date June 30, 2010
Starring: Kristen Stewart, Robert Pattinson, Taylor Lautner, Ashley Greene, Billy Burke
Teenie boppers rejoice as a new Twilight movie will be released in June. Vampire Edward continues the fight against Jacob and his pack of werewolves all while trying to protect Bella from a bloodthirsty vampire.