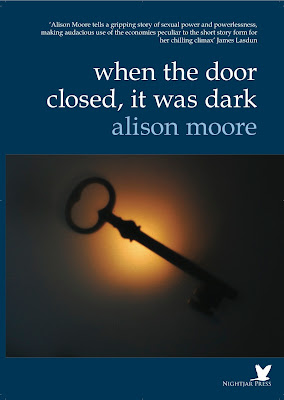 "When the Door Closed, It Was Dark" by Alison Moore

Nightjar Press is a new British publisher dedicated to producing quality chapbooks of dark short fiction, and if their two recent releases from Joel Lane and Alison Moore are any indication, they have a fine preference for well-written, literate horror with unnerving ambiguities.
Strangely enough, both of their recent offerings – Lane’s “Black Country” and Moore’s “When the Door Closed, It Was Dark” – have nearly identical themes, both centering on a protagonist dealing with urban decay, unhappy children, and self-destructive tendencies that interfere with the performance of a job. In Lane’s tale, a middle-aged policeman is forced to confront his own difficult childhood when he’s assigned to investigate a rash of crimes committed by pre-pubescent perpetrators in an area that was once his hometown; now, decades after his family left the area, the town has been subsumed by redistricting and urban development. As the investigator (who narrates the story) drinks too much and at last essentially dreams the solution, he discovers that his own ties to these strange, petty crimes are uncomfortably close. Lane’s slightly elliptical style induces anxiety, and his description of the rotting suburb (“Cats or seagulls were crying somewhere in the night”) is always evocative.
Even more disturbing is Moore’s piece, in which a young nanny journeys to an unnamed foreign land to care for a baby whose mother has mysteriously vanished. The foreign country Tina finds herself in is never given a name, but its misogyny could be nearly anywhere. Tina is trapped in a family dominated by a stern “Grandmother” and two men (“Father” and “Uncle”) who treat her as little more than chattel; they take her money and passport, and casually mention her potential as a girlfriend while Grandmother sizes up her hips. As Tina grows increasingly anxious under the unwavering scrutiny of the family, she begins to make mistakes that grow from casual to catastrophic. Moore experiments with style throughout the brief story, moving back and forth from present to past tense to give the story an uncomfortable immediacy. The denouement is genuinely shocking.
Both stories are relatively light on gore (Moore’s does begin with the slaughter of a pig in the family’s bathroom), but drenched in atmosphere and dread. Nightjar is offering up these small (16-page) books in attractive and very reasonably priced signed and limited editions (contact publisher Nicholas Royle at nicholasroyle@mac.com to inquire about purchasing). After reading these two, I look forward to Nightjar’s future releases. 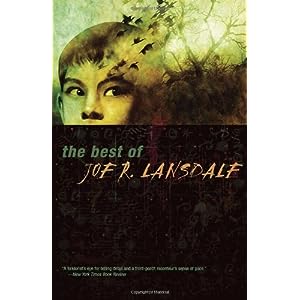 I am a huge fan of the weird, wild, and wonderful stories of Joe R. Lansdale so when it comes to a book called THE BEST OF JOE R. LANSDALE, I can make this one of the shortest reviews in history. So here it is: this book is amazing, get it, get it right now. No don’t wait to get it tomorrow. But since I am a professional, or at least I like to pretend to be, I guess I should give you more to go on than that. So hold on tight and get ready for an overdose of mojo, we’re off to Lansdale country.

Where to start with this collection of crazy, creepy, cool stories? Well how about the first story in book? “Godzilla’s Twelve-Step Program” gives us the titular big lizard and some of his other giant monster buddies trying to kick the habit of smashing cities flat. Highlights include Godzilla making little people out of soap so he can remember how it felt to squish them and King Kong coming to terms with his sexual proclivities. This is one of my favorite Lansdale stories, and that’s saying something.

Another masterpiece mash up of hilarity, horror, and just plain bizarre, is what could be now Joe’s most famous tale, “Bubba Ho-tep”. If you’ve never seen that movie starring genre favorite, Bruce Campbell, you really should as its wonderful, but first treat yourself and read this amazing story. What’s it about? Well it’s only about an elderly Elvis Presley and a black JFK teaming up to save a nursing home from a mummy in cowboy duds. Yeah, wrap your mind around that!

Speaking of the HO-TEP flick, the director of that movie also directed another short film based on a Lansdale tale for the short lived, and greatly missed, Showtime series, MASTERS OF HORROR. The hour long episode was both very good and faithful to the original, but like most things, the story is simply better. That tale is “Incident on and off a Mountain Road” and it’s about a woman pushed to the brink of survival as she is tormented on an isolated wooded mountain by a creepy, moon-faced killer.

Want to read a tiny tale that hasn’t been made into a movie? Then give “Fire Dog” a try. It’s not horror, it’s just…weird. It’s about a guy name Jim that applies for a job at the local fire station. Unfortunately the firefighters are only looking to replace their loyal Dalmatian mascot. Jim takes the gig, but then gets a little too into his work.

Want a more horrific story? Well they don’t get more icky, disturbing, and yet still chock full of classic Lansdale black humor than it does in the last story in this collection, “The Night They Missed the Horror Show.” It’s about a pair of creeps that skip the local drive-in showing of NIGHT OF THE LIVING DEAD and instead drag a dead dog from the back of their car for fun. When they run into a pair of bigger, meaner creeps that just happen to be dog lovers, well they end up staring in their own horror show.

Do you dig zombies? Want to see how a zombie story should be done right? Then read “On the Far Side of the Desert With the Dead Folks.” A great title for a great story. Set in the postmodern weird west with a bounty hunter, a bad man, a desert full of the classic Detroit autos, and yes, lots and lots of dead folks. This is one of the best, most original zombie stories ever.

Now I could go on and on about all the stories in this collection as there’s not a stinker in the bunch. Truly when this book says “best of” it means it. The only Lansdale tale that is missing from this book that I think really should have been in it is “Tight Little Stitches in a Dead Man’s Back.” Man I love that story. But that one mysterious exclusion aside, this book collects 16 of Joe’s best, most bizarre stories, and with an author this talented and prolific, that means this is one hell of a book. I highly recommend it.