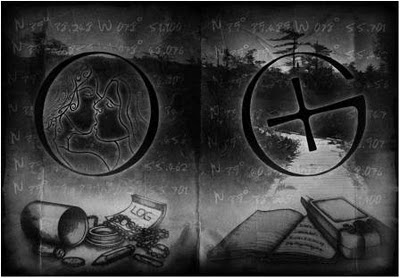 Andy Duncan’s "The Night Cache" begins with a reference to Val Lewton, and that’s no coincidence, because much of this intriguing novelette reveals as little as a Lewton thriller. Clues are provided, darker secrets are hinted at, but you won’t find a glimpse of an actual monster here.
Unlike "Cat People" or "The Seventh Victim", "The Night Cache" is not suffused with a dense, mood-drenched atmosphere, but is instead couched in the breezy shell of a near-chicklit romance. Jennifer is a book clerk (in a chain store she calls “Yarns Ignoble”) who gets tangled up with Destiny Creech, a reckless and temperamental puzzle-lover who is obsessed with “geocaching”, a sort of treasure hunt game in which small items are hidden and clues are provided via GPS coordinates. Destiny
deliberately keeps Jen in a state of mystery surrounding much of her life; a chance encounter with a cop who knows Des leaves Jen more, not less, perplexed.
After circumstances leave Jen alone to resolve the ultimate mystery of Destiny’s life, she meets up with the closest thing "The Night Cache" has to a real villain: Des’s wealthy, cold mother. Clues eventually lead Jen to an isolated swamp and a “night cache”, or a treasure that can only be located by finding a nearby reflective object at night.
Duncan’s writing is assured and frequently humorous, and his characters are compelling. He makes good use of the mysterious side of geocaching as a metaphor for the ultimate mystery of life – death – and provides plentiful and entertaining examples of the cryptograms Jen must solve.
If his climax offers up a supernatural suggestion that it (sadly) never really explores, Duncan nevertheless provides a last half that moves briskly and provides both tension and nicely observed melancholy.
"The Night Cache" is a fast, wry little tale for readers who are willing to forego the usual tropes of horror fiction in favor of something less easy to define.

Wow, what can I say about this book that won’t instantly make me sound like a drooling fanboy? That it has been comprised by editor extraordinaire, Ellen Datlow, she of the YEAR’S BEST FANTASY AND HORROR fame and editor of many more (over fifty at last count) anthologies? Or how about that this book collects some of the best horror stories from some of the best known authors from a twenty year (1984 – 2005) span? Hell, just listing the table of contents will most likely have many horror hound’s heads a-popping with glee before I’m even halfway through it. Damn it, I’m just going to have to man up, wipe away the drool, and dive into this review. Oh and if your head does go pop, well you can’t say I didn’t warn you.
DARKNESS collects twenty-five great tales of terror from some of the biggest names in the field. However, what I really dug was the few stories found herein from authors I didn’t recognize. This is meant as no slight to their considerable talents, only that I should read more. Pat Cadigan springs quickly to mind. She’s mostly a sci-fi author and maybe that’s why she was new to me. However, after reading her wonderful “The Power and the Passion” I will definitely be looking for more stories by her. Terry Dowling was a name I recognized but couldn’t place. I can only assume that’s because I’m not from Australia where I take it he’s a really big deal. In any event Mr. Dowling’s story, “Stitch” was a frightening “yarn” (you’ll get that once you read the story) about a young woman facing her fears, both real and imagined, and the extraordinary steps she was willing to take to overcome them. There are other authors collected here whose stories I had yet to read or didn’t immediately remember. I like them all and was glad to have read them, but I promised you some “big names” so without further ado, let’s get to the Titans of Terror.
Clive Barker starts the show off with a great story from his legendary BOOKS OF BLOOD, “Jacqueline Ess: Her Will and Testament”. The always sublime Thomas Ligotti, a man whose considerable skills I, and many others, often equate with H.P. Lovecraft, gives us “The Greater Festival of Masks”. George R.R. Martin is mostly known for writing fantasy but I love, love, love his horror tales. His “The Pear-Shaped Man” is a good example of why I love his stories so. Similarly, Peter Straub is best known for his magnificent, intricate novels but when he sets his mind to pen a short story, you’re in for a treat. I first read Straub’s “The Juniper Tree” in the awesome collection, PRIME EVIL. It was one of the best stories in that book and it’s one of the best in this book. Consistency is a good thing. “Two Minutes Forty-Five Seconds” by Dan Simmons is one of the shorter stories in the book but don’t let its size fool you, it’s tightly wound terror at its finest. Joe R, Lansdale can do no wrong in my book and in this book as well. His “The Phone Woman”, is a dark, nasty tale that’s a bit of a departure from his usually off-kilter stories. The Master, that would be Stephen King to mortals like us, shows why he is still at the head of the class with his strange, silly, and scary “Chattery Teeth”. I miss Poppy Z. Brite. While she’s thankfully still alive she doesn’t write horror anymore and the genre is a much sadder place for it. Luckily one of her best tales, “Calcutta, Lord of Nerves” can be found in this collection for horror fans that might have missed her the first time around.
Wow, I’m not even half way done and this review is getting kind of long. Ok, here are some more authors fired at you machinegun style: Dennis Etchison, Michael Marshal Smith, David J. Schow, Joyce Carol Oats, Neil Gaiman, Gene Wolfe, Steve Rasnic Tem, Ramsey Campbell, Joe Hill, and on and on. Yes I am skipping a few authors and stories but really, if you haven’t already decided to get this amazing book by now, you never will. Simply put, DARKNESS is exactly what it says it is; a great collection of terror tales spanning the last twenty years. If you are any sort of horror fan then you will have already read many of these stories, but trust me the book is worth getting for the few that you haven’t read. For me, there were five stories in this collection that I had never read before and you know what? I loved everyone one of them. As for the others, they were old favorites that I hadn’t thought about in a long time so getting acquainted with them once again was a real treat.
I can’t recommend this book high enough and no, that’s not just the rabid fanboy inside me talking. This is my serious critic’s voice. I know it doesn’t translate well in the written word, but trust me.

I give DARKNESS 5 Black Gloves out of 5.

Now where did I put that sponge for my drool?