Anyone who’s read Rio Youers’ novellas MAMA FISH and OLD MAN SCRATCH already knows that this new kid on the genre block is somebody pretty special. The use of language, the insight into his characters, and his descriptive gifts all marked Youers as one of those “writers to watch”, a hackneyed phrase but true in his case. It didn’t even matter much that both novellas were occasionally reminiscent of the works of other writers – MAMA FISH felt a bit like vintage Bradbury, and SCRATCH was the best long fiction Stephen King never wrote.
Youers’ new novel END TIMES may also remind you a bit of another fine writer – specifically Peter Straub’s GHOST STORY - in its tale of a vengeful female spirit wreaking mayhem on those who were responsible for her death, but the similarities end there, because for the most part END TIMES feels like one of those books wherein a writer finally finds their own voice and shouts it loud and clear. Told in a gorgeous style that somehow manages to combine gritty realism and poetic metaphor, END TIMES will very quickly have you thinking of no other author but Rio Youers.
The story, which essentially occurs in three acts, centers on Scott Hennessey, an on-and-off heroin junkie and obsessive-compulsive with a troubled past and a distinctive physical attribute: He has no fingers, only a thumb remaining on each hand. We know from the beginning that Scott cut his own fingers off, but we don’t find out exactly why until the book’s second act, when we also discover the event in Scott’s past that led to the death of Mia, the young woman at the heart of END TIMES. When we first meet Mia, she’s a beautiful seductress who lures Scott into an enchanted forest (“the trees reached to the sky with the grandeur of a child’s ambition”), and he soon falls hopelessly in love with her.
Unfortunately, Scott’s all-or-nothing psyche comes to crave the mysterious Mia all the time, and he fills the time gaps without her by returning to his heroin addiction. His job as a successful journalist and his one strong friendship, with a crippled man named Sebby, are endangered, and Scott’s life begins to spin out of control, forcing him to remember…
The book’s second act focuses on Scott’s time with a wealthy cult leader named Shintaro, who rescued him from the streets, helped him kick his addiction the first time, and inducted him into a dangerous sect of self-mutilation. Scott slowly begins to remember the terrified young girl who Shintaro abducted and held captive, and connects her – impossibly – to his beloved Mia.
END TIMES significantly switches gears for its climax, as Scott follows Mia out of Britain and back to her home, the Pine Ridge Reservation in South Dakota, land of the Oglala Sioux. Scott soon discovers that he plays the starring role in an ancient legend, and he slowly accepts his fate, even while dreading the outcome.
If END TIMES stumbles, it’s in that third act. In the book’s first two-thirds, Youers builds the tension expertly (even while occasionally providing some very black humor); people die around Scott in terrible ways, but it’s really Scott’s own guilt and dawning realization about his past that provide the book’s most disturbing elements. But the finale becomes nearly a fairy-tale fantasy, complete with the trope of a white male who becomes the central figure in a mystical native prophecy. A revelation regarding Mia here doesn’t really gibe with her appearance (as a pathetic victim) in the second act of the book, and the ending doesn’t satisfactorily explain the title of the book. There’s also an odd point-of-view shift that is justified by the plot, but nevertheless feels slightly clumsy.
But there’s always that glorious voice to come back to. Listen, for example, to this: “I picked up the vial and looked at the brown powder inside, like an hourglass waiting to be turned: time’s steady death.” That’s a description of heroin, and just those few words have managed to convey the drug’s appearance, addictive pull, and deadliness. That combination of ugliness, honesty, and lyricism are unique to Rio Youers, who fulfills his earlier promise splendidly with END TIMES, which is without question one of the most compelling genre works of 2010.

(Visit Rio Youers's home site here and you can purchase your own copy of the book here on PS Publishing website.) 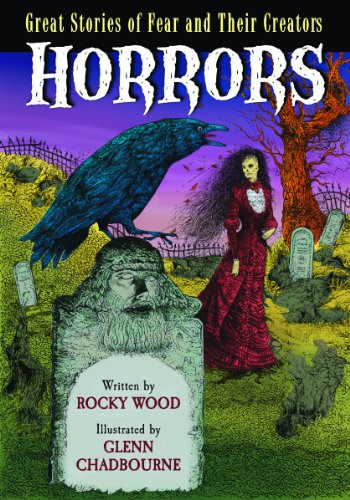 Horrors: Great Stories of Fear and Their Creators
Written by Rocky Wood and Illustrated by Glenn Chadbourne
$24.95/Hardcover
(McFarland and Co., Inc.)

Unless you’ve been too busy donning a superhero costume and patrolling your local metropolis on a nightly basis, you know that the art and popularity of graphic novels have exploded over the last two decades. Writers like Alan Moore, Neil Gaiman, Frank Miller, and Brian K. Vaughan have brought sequential storytelling into the rarified atmosphere of true literature, exploring everything from possible Masonic influences on Jack the Ripper to a socially inept twentysomething who becomes the last man on earth. Graphic novels have begun to appear in top literature lists, and have of course kept Hollywood going as well.
All of which begs the question: Where are the non-fiction graphic novels?
Forget the oxymoron to be found in that phrase, and take a look at any bookstore’s collection of graphic novels – with a very few exceptions (Moore’s charged political study BROUGHT TO LIGHT, or Alison Bechdel’s poignant autobiography FUN HOME), you basically won’t find non-fiction there.
Fortunately, a few companies are out to change that and one of the first out of the gate is McFarland. Known primarily for their niche books on popular culture, McFarland recently launched a line of non-fiction graphic novels with two releases, one of which chronicles the history of the horror novel. HORRORS: GREAT STORIES OF FEAR AND THEIR CREATORS, written by Rocky Wood and illustrated by Glenn Chadbourne, is undoubtedly one of the most unique literary histories ever produced, complete with Wood’s knowledgeable and even playful commentary, and art that is frequently stunning.
Wood begins the book by focusing on the fateful events of 1816 (“The Year Without a Summer”), when a gathering at Lord Byron’s infamous Villa Diodati led to the creation of both Mary Shelley’s FRANKENSTEIN and John Polidori’s THE VAMPYRE. Wood and Chadbourne’s re-telling of the story of Frankenstein is crisp and frightening, with Chadbourne’s line drawings slightly reminiscent of Bernie Wrightson’s famed illustrations for the book, but possessing their own macabre character.
But more interesting is the amount of time spent on Polidori’s THE VAMPYRE, a book few have read but which takes on a more interesting place in the annals of horror, thanks to both the background and detailed synopsis provided here. Wood rounds out the section on FRANKENSTEIN and THE VAMPYRE by noting the strange and ironic fates suffered by their creators.
The remainder of the book is devoted to briefer looks at other classics, including BEOWULF, the works of Poe, and a section on the Gothic novels. Wood has also provided a thoughtful afterword, discussing how much of the original material he kept in adapting the stories (in regards to Polidori’s THE VAMPYRE, Wood wryly notes “the good doctor’s prose is too turgid for my taste”).
Wood’s text throughout is superb, with just enough of the touch of the poet to capture the style of the original works (but also enough fact to enlighten even the most knowledgeable scholar of horror), and Chadbourne’s illustrations kept me lingering on certain pages (my personal favorite: The full-page rendering for Poe’s “The Fall of the House of Usher” that depicts a mysterious top-hatted figure coolly lounging against a gate while the house dramatically implodes behind him). Even the book’s layout is artful, with unusual fonts, and lovely touches like black word balloons with white writing for the monsters in each piece.
Kudos to McFarland, Wood and Chadbourne for leaping into untested waters with the exquisite and insightful HORRORS. Here’s hoping it will help to open the flood-gates for non-fiction graphic novels.

(Visit the author Rocky Wood's MySpace page here and also artist Glenn Chadbourne's website. The book can be found here on McFarland and Co.s website.)
Posted by Nickolas Cook at 5:25 AM